A Word every day to get you on your way! 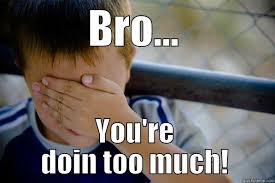 I read a lot of books. Some of them are good and some of them are a complete waste of paper. But when I read a book with a great idea in it I do two things. First, I write down the idea on paper and in a digital form so that I won’t forget it. The second thing that I do is come up with a plan to implement the idea that I have just read about. One day I was reading a book and it said the best way to increase your productivity was to keep a list of things that you need to do. Keeping a list would keep you better organized and give you a sense of satisfaction every time you crossed something off the list. Wanting to be more productive I figured I would give it a shot. They were wrong.

It wasn’t that the premise of the book was wrong, it was a side effect that keeping the list caused me. I began to keep a to-do list and cross things off as I got them done. The only problem was as I kept the list it just kept getting longer and longer. No matter how much I did, and how much I crossed off the list, there was always more to do. After a while, there was no satisfaction at crossing things off the list, there was the dread of knowing that there would always be something else to do. The more I did, the more I needed to do. I was becoming productive and driving myself crazy. Then I came across Psalm 46:10.

What I realized was I was not using the list to be productive, I was using the list to try and control the world. I was trying to do everything, and make everything work, and control everything and I was failing miserably because we are not designed to do everything, that’s God’s job. I was working harder and more productively but if I kept it up I was going to work myself to death. So I added one more thing to my list, “Be still and know that he is God.” Each time I see that on my list it reminds me to stop, sit down, and know that I don’t have to do it all because I am not God. Friends, do what you can and be as productive as you can, but always take time to sit down and remember that in the end, God is the one in charge.